Leonardo in Valdichiana: the design of the territory and the science of water

the design of the territory and the science of water


Leonardo da Vinci was also employed as a cartographer, numerous, in fact, are the maps he designed in his long life.

The Map of Valdichiana is one of Leonardo's most refined cartographic products. It was designed between 1502 and 1503 when the artist was in the service of Cesare Borgia as an architect and military engineer. It is a paper that stands out for the richness of its topographic and hydrographic contents but also for the particular bird's-eye representation that makes it a sort of aerial photography before its time.
To give the impression of three-dimensionality is the perspective representation of castles and mountain reliefs, as well as the evident crushing of the Volterra area, artfully compressed to extend the cartographic representation to the sea. The numerous toponyms allow the identification of 254 geographical places, including cities, castles, and rivers distributed in an area extended between Florence, the Aretino, the Trasimeno, the Sienese Chianti, the Volterrano, the Val d’Orcia and the Val di Cecina. The main object of the representation, however, is the great swamp that from the Middle Ages plagued the Val di Chiana with unhealthy air.
Leonardo highlighted the marshy area with a light blue so as to make the numerous streams that flowed towards the Chiana master canal, the ancient river Clanis which gives its name to the region, clearly visible with a darker blue. for about three centuries it flooded the surrounding plain. The hydrographic function of the map is well highlighted in a study sheet in which Leonardo detects a dry canal, noting that it was closed by the lord of Perugia Andrea Fortebracci: “Braccio da Montone closed it".
It is likely that Leonardo's map would serve as a preliminary study for a remediation intervention in the Chiane area.

A second hypothesis is that the hydrographic study of that territory was destined to transform the unhealthy marsh into a large water reservoir to guarantee the constant navigability of the Florence Canal, the project that Leonardo developed in the same period for the Florentine Republic. In this second hypothesis, the Valdichiana map is linked to the other maps of the Tuscan territory in which Leonardo elaborates the project of the navigable canal from Florence to the sea. 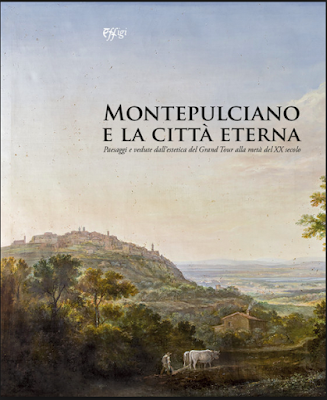 The exhibition aims to compare two cities in the imaginary they had to the travelers of the Grand Tour. The cities are Montepulciano, where the exhibition is proposed and Rome, a favorite destination for European travelers.
The celebrated Roman countryside, as well as Montepulciano and its rural surroundings, is displayed in over a hundred oils, drawings, watercolors, vintage engravings collected here. A beautiful exhibition for those interested in the romantic landscape paintings, history of travel, cultural heritage.


Presentation of the restoration of the "Madonna penitente" painted
by the Italian Baroque Giovanni Antonio Ricci called "Lo Spadarini" an artist who was a member of the Caravaggisti (followers of Michelangelo Merisi da Caravaggio).
Museo Civico , Piazza Grande June 1st 2018 at 1630h
(speech in Italian) 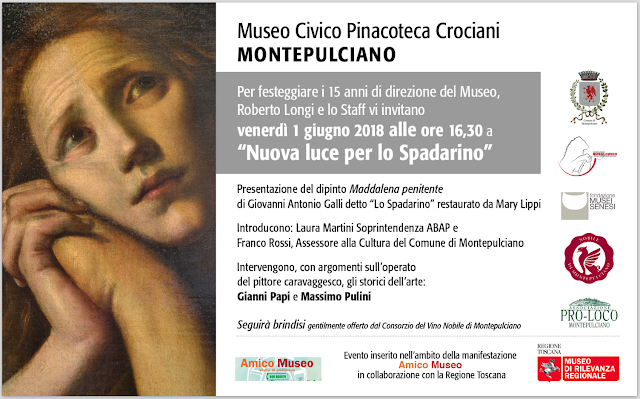 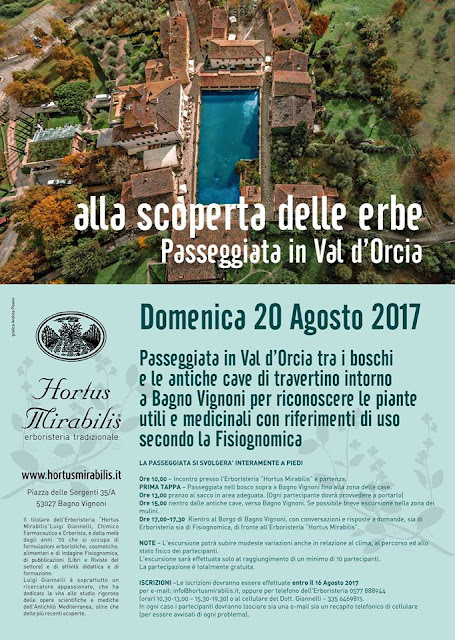 On Sunday August 20th
The meeting point is in Bagno Vignoni
in front of the Herbalist's shop at 10AM.

The event is free of charge.
Info and reservation to info@hortusmirabilis.it

The good century of Sienese art


The good century of Sienese art is one of the more important cultural initiative of 2017.
It finally introduces the idea of a "widespread" exhibition not limited to a museum but rather part of an itinerary among three beautiful towns considered gems of art and architecture: Montepulciano, Pienza and San Quirico.

From the exhibition website: "The idea of this original exhibition came about in order to rectify such a severe shortcoming. The towns of Montepulciano, San Quirico d’Orcia and Pienza are each going to host a section of the exhibition dedicated to an important artist from the area and to his environment, inspired by a masterpiece already present in the towns. Each sector also envisages an itinerary to discover other works as significant as those on display but which, for various reasons, have remained in their original locations. This solution enables the ideal completion of the visit with the added value of travelling around and discovering a splendid and magnificently preserved land. All the works on show come from prestigious public and private collections, churches and other religious institutions, the aim being to offer visitors as thorough a vision as possible of a great century which has been unjustly forgotten."

From 18 March to 30 June from Monday to Sunday 1030h to 1830h (Tuesday closed)
The entrance ticket for the three locations costs 12 euro.


Montepulciano is a small town but given its geography its quite hard to climb its steep streets.
Luckily there is a service of public transportation supplied by a small bus nicknamed "Pollicino"
These orange buses run loops around the town and its suburbs and are especially handy to lift you up from the lower parts of the town to the top of the hill.


There are several stops along the main streets which take the name from major places.
Here the maps of all stops 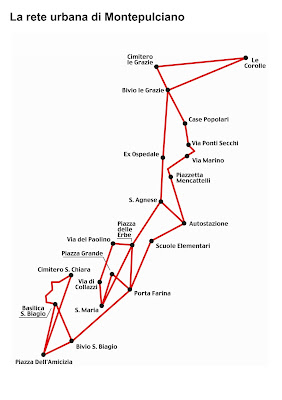 You can by the hourly ticket at the price of 1,10 EUR from local shops (i.e bar) and online trough this website: http://www.tiemme.tpl.busweb.it/urbano
You need to sign up first so you can easily pay online anytime you need a ticket and receive it on your email. You need either to print it or carry the electronic format on your device (phone, ipad etc).
Unfortunately the website is only in Italian but you can see the below picture how to set the website to buy a single ticket (valid for 60 min) 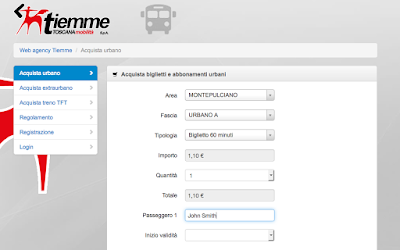 
Montepulciano does not slow down in winter. This is the best time of the year for unique activities Here some of our favorite!

forget the gloomy winter scenario, Tuscany hills region can offer splendid days with dramatic views like the one below.  Brisk morning walks will reward you with the beauty of the landscapes, dramatic skies, great pictures and a good excuse to indulge with another winter treat: food!

OK cherry season is over but for the foodies visiting this part of Tuscany may be even better as it is the only time of the year where you can get some delicatessen. Truffles first but also mushrooms and venison, turnip greens (with sausages), kale (in Ribollita soup), boar (stewed with olives) and the omnipresent freshly-pressed olive oil (bruschetta!). All restaurants in Montepulciano are open during November and December months and boasting best season recipes. Some will close for annual vacation between mid January and mid March but there is always plenty of choice within and outside the town.

from the end of November to the beginning of January, every weekend in Montepulciano is cheered up with a lovely Christmas market with lights, stalls selling season and local produces, music, mulled wine... and all this set in a beautiful Renaissance background, what more! Oh by the way, even Santa left the Pole to settle in the city Fort. (More info on: http://www.nataleamontepulciano.it/)

most of the town's restaurants design a special "capodanno menu" with their best recipes, needless to say to reserve well in advance. After dinner everyone gather in the main square by the gigantic bonfire (lit from the afternoon) to share wine, dance and wishes for the new year.

need to recover after the festivities or simply wish to treat yourself plunging in healthy mineral-rich water heated by mother-earth? Well just pick up one of the many hot-spring pool and Spas near Montepulciano. Enjoy a cold sunset or a rainy day in swimming wear.